to see the world in a grain of sand.

No Widgets found in the Sidebar Alt!

No Widgets found in the Sidebar Alt! 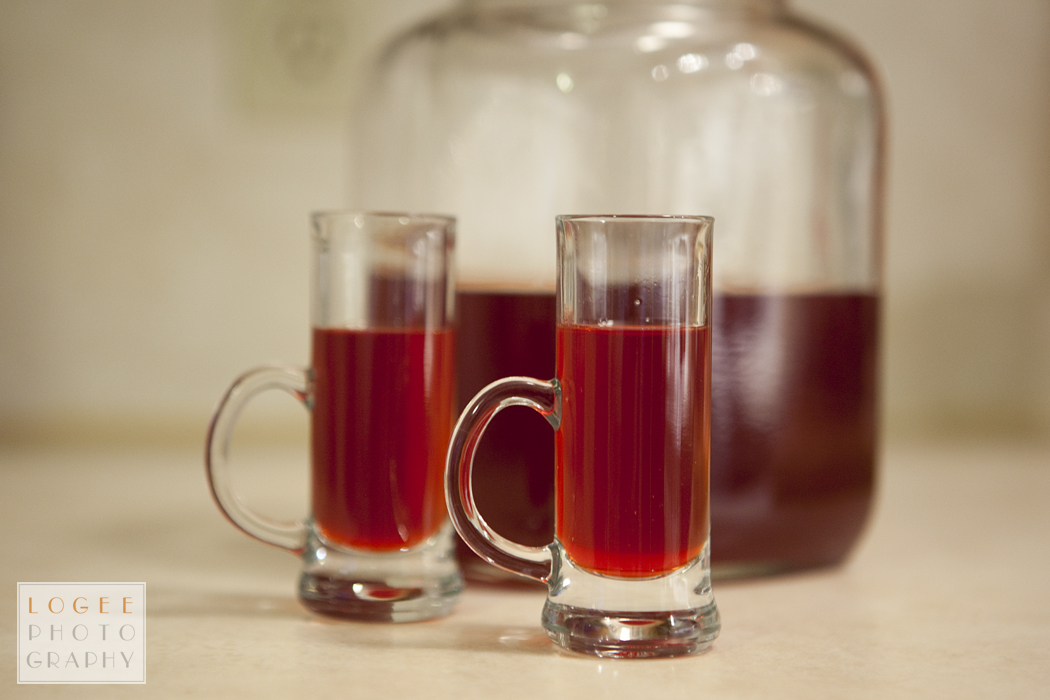 Every summer, I keep a close eye on my mother’s Nanking cherry trees. When the bright red berries have finally soaked up enough sun, I pick the trees clean and either eat them all or force my mother confect them into Nanking jelly.

This year, there weren’t many cherries on offer. The trees had been struggling to grow and when I had picked what was suitable, there was only about a cup of cherries in a bowl. The local magpies nattered at me the whole time, clearly claiming ownership of the tree’s fruits, but I’m a people and I wanted them, even if there were only a few.

After listening to me complain about the state of the trees, my mother produced a giant bag of frozen cherries from last year’s harvest she’d been hoarding in the deep freezer. And that’s when I knew I was making some booze.

Let’s get virtually crunk together by following the recipe below. Bottom’s up!

Step 1: Thaw 6 cups of Nanking cherries and put them into a jug that has an air-tight lid. I swear by the Bormioli 2.3L Glass Jug from London Drugs. I use these jugs for my cold brew coffee and they’re just amazing. The glass is nice and sturdy, and the lid really locks down well.

Step 2: Release some juice. The recipe calls for muddling the cherries to release some of their juices, but since mine were previously frozen, I didn’t really need to do that. Nanking cherries are incredibly fragile, so I pretty much just drained off the juice that was released during the thawing process.

The juice is to be conserved for later, so throw in a splash of vodka & refrigerate or, if that makes you side-eye the safety of said juice, put it in the freezer for now (you will need to thaw it later, though).

Step 3: Let’s booze things up! I don’t know much about brandys, but selected St. Remy’s VSOP. I based my decision solely on the ideas of “Isn’t brandy a French invention?” and “This one is priced well.” I took a sip of the brandy before adding it and I think a similar flavour could be achieved with a not-too-sweet rum or a smooth tequila.

As for the vodka, I used Luksusowa potato vodka. This brand is naturally gluten-free, but it is not tasty. I’m not a huge fan of vodka to begin with, but I would never sit down to drink this stuff. It was leftover from a vodka tasting party we went to last year, and there are many better vodkas out there. But this was in the freezer and it needs to get used for something, so into the jug!

It’s one cup of brandy and 1/2 cups of vodka. This is added to the jug, which is then shaken (not stirred!).

Step 4: Into the closet! The mixture needs to steep for 1 week in darkness at a constant room temperature. I selected my basement linen closet, which is dark and not near any exterior walls or heating vents.

Step 5: After the week is up, it’s time to revisit that cherry juice we set aside earlier. In a saucepan, combine the cherry juice with 1 cup of water and 1 cup of sugar. Bring the mixture to a boil until the sugar dissolves.

Step 6: Once the sugar has dissolved, let the liquid cool to room temperature.

Step 7: Add the liquid into the steeping jar. Big ups to my fiancé for modelling this step for me!

Step 8: Put the jar back in the closet for another 2 to 5 days. I honestly forgot what I was doing, though, and left it in there for a full week. I’m busy, okay?!

Step 9: Now that the cherries have given all they could give, it’s time to toss them in the garbage. Line a sieve with a few layers of cheesecloth, and then pour the liquid through to strain out all the random cheery bits and pieces.

Step 10: Once you’ve poured the liquid through, dump the cherries into the cheesecloth, gather it up and ring it to extract as much liquid as possible. One does not waste good alcohol.

Step 11: Clean out the jar, pour the liquid back in for storage and enjoy! Though I ‘m fairly certain the alcohol content of this liqueur makes it shelf-stable, I do store ours in the fridge, just in case. I’m no expert, so you’re on your own for this part!

The liqueur is pretty sweet, but if you use Nanking cherries too, it will have a slightly tart taste. I’m really happy with how this turned out. It’s the perfect boozy cherry flavour. It’s nice and summery and would be great drizzled on ice cream or mixed with orange juice, but on its own it’s just wonderfully tasty.

Now that Nankings are out-of-season, I plan to spend my winter concocting more booze by swapping out the frozen cherries for all sorts of frozen fruits from the grocery store. Raspberries? You betcha. Peaches? Let’s do it! Frozen peas? No, no, I don’t think so…

Jillian is a photographer & archaeologist living and working in Calgary, Alberta, Canada. She is one-half of the team behind Etsy Calgary, one-third of the team behind YYC Girl Gang, and the photographer behind Logee Photo. You can follow along here and on her favourite social media platform, Instagram. She is obsessed with it. You can follow her on @logeephoto and @indianajill.ca.

Though I hate the forest fires, as a photographer

A view I could wake up to every day. If it wasn’

Taking our time today to relax and let our bodies

Not a person in sight. Perfect! Topical: City Cou

Lots of wildflower friends in full bloom in the Ko

Who else has read Merlin Sheldrake’s book Entang

String lights in the garden - a warm glow for ever